You are here: Home / Torah / Parashat Va’erah: A teaching moment, but for whom?

“I appeared to Avraham, to Yitzhak, and to Ya’akov as El Shaddai, and I was not known to them by my name….”

So God answers Moshe’s questions at the beginning of this week’s parasha by giving him the Divine name—the Shem HaMeforash.

But wait! Earlier in the Torah, this name of God was used by the Patriarchs themselves. So why does God here tell Moshe that the Patriarchs did not know Him by that name?

We can, of course, argue that the book of Shemot was written from the point of view of its generation, and so the names of God were given from their standpoint, regardless of how the Patriarchs themselves had known God. 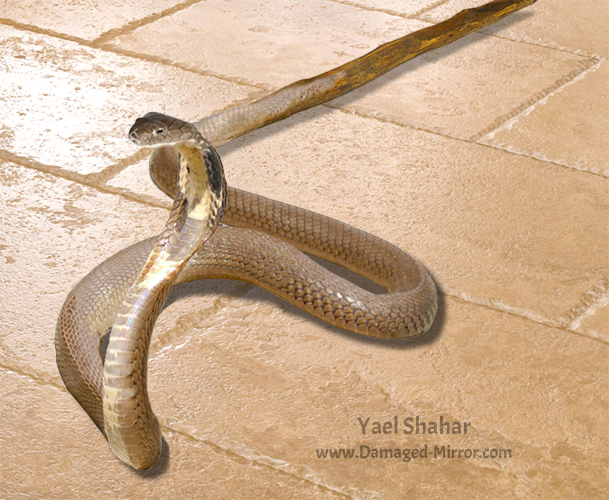 But there is another possibility: perhaps this seeming contradiction reveals a deeper truth—a truth about how people see the world and each other.

Most of this week’s parsha is concerned with Moshe and Aharon’s mission to Pharaoh. They work signs and wonders, and Pharaoh repeatedly “hardens his heart” and refuses to release his Israelite slaves.

It is a tale of the institutionalization of oppression, and how difficult it can be to break through stereotypes, bureaucratic apathy, and governmental obstinacy. But it’s also a lesson in how those in power can rationalize their decisions—even disastrous decisions—in order to avoid acknowledging past mistakes.

Two wrongs don’t make a right, but they can make a Conceptzia

Pharaoh compounds his first mistake by becoming further entrenched in his determination not to let the slaves go free. There is an important lesson in how mindsets become prisons. It’s a known phenomenon that when presented with a diversity of information, we selectively filter out anything that does not corroborate past experience.

In Pharaoh’s case, this is made much easier by the fact that Aharon and Moshe start out with easily replicated tricks. Once assured that his own magicians can reproduce their “signs and wonders”, Pharaoh has no reason to see that anything unusual is afoot. The challenge to the status quo can be reasoned away.

Even when things escalate to a plague of lice, which Pharaoh’s court wizards are unable to reproduce, Pharaoh continues to “strengthen his heart.” Habits of thought are hard to break. Only when a plague strikes which the court wizards not only can’t reproduce, but from which they can’t even save themselves, does the text say, “Hashem strengthened Pharaoh’s heart.” The Midrash Rabbah, in noting the change of language says:

When God saw that Pharaoh did not relent after the first five plagues, He said: Even if Pharaoh now wished to repent, I shall harden his heart, in order to exact full punishment from him.

Pharoah’s problem is well-known to psychologists; it is called “confirmation bias”. Once a way of thinking becomes habituated, each time we resist change, we further lose our ability to see contradictory facts. Pharaoh’s dismissal of the evidence at hand was at first a conscious act, but by this point, it’s out of his hands; he has become a slave of his own “Concept” and can no longer see what is obvious to everyone else.

And of course, what happened to Pharaoh in the realm of the mind had happened to Egyptian society in a more concrete sense. They had institutionalized slavery. It had become a habit, a permanent feature of their economy, which they could not leave behind of their own free will.

Seeing God in the improbable

For both Pharaoh and his people, it will literally take a miracle to shake them out of their habits and make them do the right thing. And this is the solution to the contradiction pointed out above. At every major turning point, God tells Moshe that Pharaoh will not listen to him, and will inevitably bring about the next escalation, until finally the results can no longer be reasoned away. By highlighting the institutionalization of the slavery, the eventual emancipation is shown for the miracle that it is.

“By this you’ll know I am Hashem”—by the fact that something will happen that could not normally come about in the natural course of things. A whole people will be freed from the iron grip of institutionalized slavery, not because the slave-holders have seen the error of their ways and not because the institution is no longer profitable. The emancipation will happen against the will of society and its leaders, long before social norms develop against slavery, and long before human rights organizations and lobbies exist that might fight the institution on its own ground. And yet, it will happen.

The hardening of Pharaoh’s heart is a sign that what happens next is a miracle. It is a lesson in seeing God in the improbable and seemingly impossible.

A lesson for whom?

But for whom is this lesson intended? Obviously, the Egyptians are the immediate audience, since only when they are convinced that they’re dealing with something outside of their experience, can they be induced to take action.

But the broader lesson seems aimed at Bnei Yisrael themselves:

…and you will know that I am Hashem your God, Who has brought you out from under the burdens of the Egyptians.

While the Patriarchs may have known God by the same name, it is through His direct intervention in Egypt, an event that seems to go completely against the natural course of history, that Israel will know what their God is all about.

But the lesson isn’t confined only to the generation that actually experienced it. It is equally applicable to our generation. The same miracle is evident in the survival of Am Yisrael as a people through two thousand years of exile, persecution, and assimilation.

Perhaps that lesson too is hidden in plain sight at the very beginning of our parsha, which speaks of more than just the end of the Egyptian slavery….

And I will take you to Me as a people, and I shall become your God, and you will know that I am Hashem your God, Who has brought you out from under the burdens of the Egyptians. And I will bring you to the land, that I swore to give to Abraham, to Isaac, and to Jacob, and I will give it to you as a heritage; I am Hashem.

The lesson in “knowing God” taught by the seeming impossibility of the Egyptian emancipation is applicable to our own day, as we come out of another, much harsher and much longer exile. But the lesson is the same lesson.